That day we got up at about eight with is considered late on this trip but all of us were tired because hotel rooms are not that comfortable even though we all had our own beds. That day we had a half day in Barcelona because we were driving out to Los Palamos for a nice vacation on the beach. My sister wrote a Los Palamos paper so you could look at that if it’s posted on the blog. That day my parents went on a run and the kids kept sleeping because we were super tired. At about nine thirty we we went out to get breakfast (which was pastries of course) and checked out of the hotel. I am so sick of pastries by now while we drive to the airport then fly back to Austin because they only have crepes and pastries in Europe, they don’t even have smoothies! We took a taxi to the airport to pick up the rental car so we could drive to the beach and the Barcelona stadium. When we got to the airport we were a little bit lost but we ended up finding our way to the car garage. We were going to check in at the desk in the little glass building for the rental car but it was locked. So my dad had to go up some levels of the building and find an employee with keys and our car. We were on a tight schedule because we had to meet the person who owns our beach house at a certain time. My dad got our stick shift minivan and we raced out of that parking garage in a flash of light.

We were then driving to the Barcelona stadium for a tour of the history and the stadium. On the way my parents really stank up that car with their stick shift driving skills because whenever they shifted gears they stripped the gears. They both haven’t driven a stick shift in eight years because they both have had automatic cars since they moved to Texas. We were also still stressed because we wanted to be at the beach at our meeting time. After a stressful ride we found a parking garage and parking spot, then walked to the Huge stadium. I was very excited for this stadium because I like seeing the history of sports teams and all the trophies that they earned. We got an audio tour of the history which was super cool because we saw highlights and there was at least a hundred trophies in there that were won by the amazing Barcelona team. My parents friend’s dad was a professional soccer player at Barcelona and we saw a signed version of his old jersey. 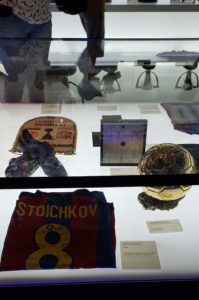 It was really cool and I would tell you what happened but it was a lot of information to take in so I won’t. After seeing the whole history segment we went to the back and started our stadium tour.

First we saw where the players enter in and all of the hallways with the different rooms like the medical staff the offices and more. We then entered the room that the players are interviewed in with the Barcelona wallpaper in the background. There was even a mic in the corner of the room to interview the players with when you are a sportscaster. The next room was a room with three chairs and a desk with a mic on the stage and like eight rows of movie theatre seats (not reclining) in front of the stage. The room was for newscasters to ask the coaches questions about anything and the coaches giving them direct responses. We then moved on to the visitor team’s locker room but not the Barcelona locker room. There were nice showers and towels in one add on room and changing rooms in another add on room. Then there was the main room with the jersey’s hanging racks and the shoe and shin guard compartments.

Thomas at the field

We then got to walk down the tunnel that the players walk down right before every game. After that we walked next to the field and got some good pictures of the lush, short, and green grass. My dad signed us up for a three-sixty virtual reality tour of the stadium which is also so much information so I’m not going to explain it. It was really cool to see though I liked the three-sixty aspect of it because you can see your surroundings. We finished the virtual reality thing and left the stadium. There was a restaurant on the stadium property so we ate there, it wasn’t great food but we ate it really fast and went to find the car. We couldn’t find the parking garage for a while but we ended up looking right next to it and a man walking by showed us where it was, and we were out of Barcelona.

This entry was posted in The_Bartons, Uncategorized. Bookmark the permalink.
Logging In...